Many cities around the world are making efforts towards creating sustainable transport systems. One central tool in this transition is the use of the green transportation hierarcy, which puts environmentally friendly modes of transport first according to a pyramide-shape priority list:

According to this hierarcy, city planning and infrastructure should give first consideration to pedestrians and cyclists,  then public transport, and cars should come last. The idea is to support green modes of transport and to have more efficient flows of traffic in urban areas.

Unfortunately, this thinking has not yet made its way to Brussels. Most infrastructure is dedicated to cars – both moving and parked. Cycling and walking infrastructure seem to come last in this city, and public transport on the road – buses and trams – do not have priority over private cars either.

For example on Chaussée de Chareroi, trams, cars and cyclists are all forced to share one lane:

In rush hour the street is a nightmare for all road users: Individual cars block all other traffic, forcing trams to slow down to a crawl. Cyclists are squeezed between trams, moving cars and parked cars on both sides of the road. Countless delivery vans and prisoner transport vehicules also occupy a big chunk of the available space, making the street a logistical nightmare.

As a cyclist, I try to avoid the street as much as I can, but unfortunately it is a main line between different parts of town and therefore unavoidable at times. In addition, getting stuck between tram lines is a real concern for cyclists. This problem would be solved by transforming all the parking spaces on the side of the road into a separate cycling lane.

In addition, buses suffer from a lack of priority in Brussels. For example rue Blaes in Marolles is a one-way, one-lane street, where cars are allowed to park on both sides of the road. The street has two bus lines running through it, and one of them, line 27, is an important route to Brussels’ international train station Gare du Midi. Unfortunately,  buses frequently get stuck on the street due to parked cars blocking the way:

Sometimes these standstills last over half an hour, which creates delays for public transport users, general frustration and noise on the street. Other traffic gets stuck behind the bus and has no alternative but to wait for the reason of the delay, the parked car, to be dealt with. Emergency vehicles are slowed by bad traffic management and generous parking on the street as well.

Just one badly parked car can block dozens of people on a bus or tram. Once I witnessed a scene in Sablon at rue de la Régence, where a car parked right under a “no parking” sign blocked the street, and a long bus could not turn onto rue Bodenbroek. The back end of the stuck bus, in turn, blocked all other traffic on Rue de la Régence, including the tramline. People on the tram and bus were forced to disembark and continue their journey by other means.

Those “no parking” signs are there for a reason, but many drivers ignore them, possibly due to lack of enforcement. 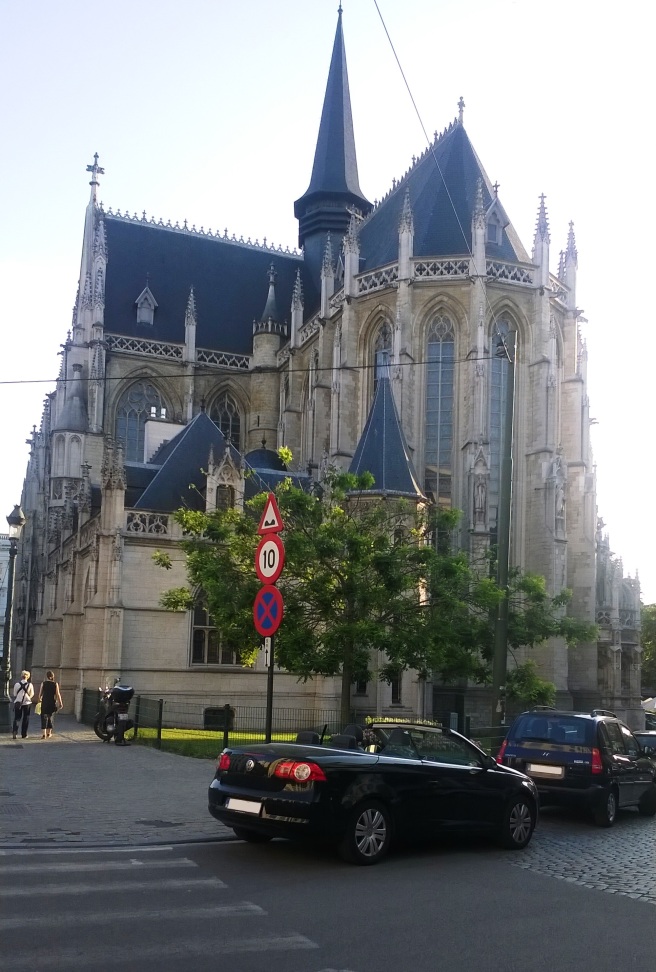 Since cars are given priority in this city, public transport has no chance of living up to its potential. People are not going to switch to using public transport if they cannot rely on it being on time, or if they are forced to abort their journeys due to frequent disturbances on tram or bus routes. Oddly enough, this leads to even more people driving!

To improve the situation, Brussels needs to start adopting the green transportation hierarcy in its traffic and city planning: Buses and trams need to be given dedicated lanes where private cars are not allowed to drive. In addition, public transport should be given true priority at traffic lights, and car parking should be organised in a way which does not disturb other traffic.

Brussels, when will you hear our calls and stop giving priority to individual cars only?

What other measures could be taken to give priority to public transport in Brussels?